If you ask Nikki Chasin to describe her eponymous line of womens clothing, she’ll tell you it’s playful but wise. “It’s fun and cute but I don’t think it’s especially young looking. I think there’s something in the clothes that’s grown-up but not serious,” she says, delicately perched in a substantial black leather chair in her new Chinatown showroom.

Nikki spent nearly a decade preparing to be a fashion designer. She was accepted into the Design and Architecture Senior High, a magnet high school in her hometown of Miami where she focused on fashion design. “My parents were like, ‘Oh my gosh, she’s saying she wants to do fashion forever and she’s only 14!’ People asked how I knew what I wanted to do at that age. I don’t know how to explain it, but how do you not know?” she says.

She moved to New York in 2009 to attend Parsons School of Design and interned for Phillip Lim, T Magazine, and J. Crew. Her senior thesis collection garnered some internet buzz, and a year later she set out on her own. Last summer, she was named one of Racked.com’s “Young Guns Class of 2014.”

Three seasons in, Nikki is putting her education to work and figuring out how to carve a niche in a market that’s often fickle, over-saturated, and highly competitive. She’s doing it the only way she knows how — by staying true to her aesthetic and instinct. Nikki, much like the pieces themselves, are at once youthful but mature, innocent but cultivated, girlish but sophisticated. You could even call her playful but wise.

What made you decide to take the plunge and start your own line?

I worked at Madewell as a designer for six months after graduation. I had just finished my Parsons thesis collection which was very creative and all about self expression. Coming from that, Madewell felt more corporate than creative. It wasn’t a great fit for me so I left. But it’s kind of what made me to want to do my own thing. After that, I worked with one of my teachers from Parsons who does production consulting for a lot of different companies. That helped me get to know the garment district. I met factories, learned how to make a fabric order. It was good to work with him and learn things like where to get labels made, how long it takes a factory to make 30 pieces, how much a sample costs. After six months, he pushed me to do my own thing. He was like, “You can do this. Go.”

Sounds like a great crash course in local production. Did you dive right into designing a full collection, or did you start smaller?

When I graduated from Parsons in 2012, Of a Kind reblogged a photo from my thesis collection. They do limited edition collaborations with independent designers, so I reached out and asked if they wanted to do something. They started asking me all these questions about production that I didn’t know how to answer. So I said, “Thank you, I don’t know what I’m doing, but I’ll talk to you when I do.” Then I worked at Madewell and with my professor. Afterwards, I called them again and said, “Let’s do something.” Producing a whole collection is really crazy, so I thought it would be great if I could do one piece first and give myself time to figure out the rest. My first round of production was a dress for them. We made 35 and it sold out.

What’s involved in designing a collection to selling it? 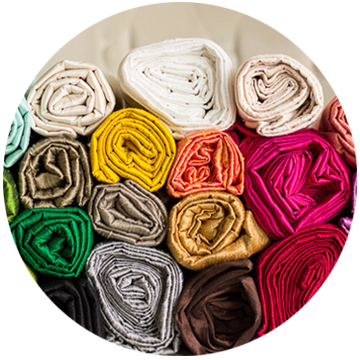 I start with fabric because I use a lot of mills in India and Europe. Most vendors have agents here, or I meet them at tradeshows. I look at 8×10 swatches and pick what I like. I use a lot of specialty fabrics which usually take six weeks to weave. So I do that way before I even know what the designs are. 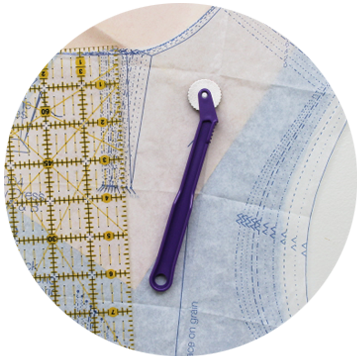 I use a lot of repeat styles, but I also change them a lot. I go through past seasons and look at what styles I want to bring forward. If I design something completely new, I work with a pattern maker to develop it. I’ll do a muslin version to see how it fits and try it on a model. I might make some adjustments then go right into the sample fabric. It usually takes a week or two to have a sample made. 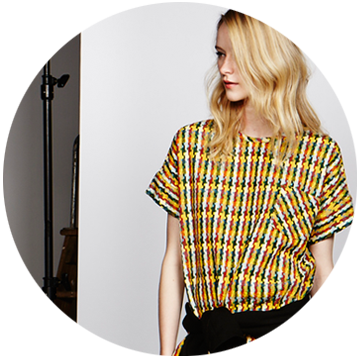 Once I have all of the samples, I’ll do a photoshoot and put the lookbook together. That might take two weeks. Then I go to tradeshows, which usually last three to four days. I meet with buyers and they look at everything and take pictures. A few weeks later, I’ll get their orders in and then start working on production.

The production process seems rather mysterious. How do you find factories? What kinds of minimums are required for production?

It’s getting better because there are companies that are trying to make production more accessible. Maker’s Row is an online subscriber service where a factory can make a profile and people who have worked with them can post reviews. It’s great. But still, you’re not just going to give a factory an order without seeing their samples. Plus, you need a sample of your own garment. A shirt sample might cost $125-$150, a coat or dress $300-$400. It’s expensive. I would say most factories in New York want you to do 50 pieces of each style, but I’ve done 20 or 30. The less you do, the more you’re charged per piece. They’ll do 20 pieces, or even 15, but they’re going to charge you almost the same price per garment as a sample costs.

What steps are involved in the production process?

Once you have samples, you also need to make sizes. If you send your stuff to China, they’ll do a sizing package for you, but that’s kind of missing in domestic production. Most factories here are too small to do it themselves, so you have to send it to a grader who then does the sizing. The grader will arrange the sizes on your fabric in a way that tries to save as much as possible; it comes as a big piece of paper. That gets sent to the factory, and then the factory cuts and manufactures it. If you’re doing a placement print where you always want the print to be in the same place, like a big flower on the front of a shirt, then you have to account for how much fabric you’re going to waste. Or if you’re dying fabric, you need to send it to a dyehouse and then to the factory. There’s a lot to figure out.

How do you decide your price points? What percentage of the final price should a designer expect to see?

If you’re wholesaling, stores will usually have a markup of 2.3-2.5 times the wholesale price. I expect them to do 2.3. That means if they’re selling a dress for $400, then I sold it to them for roughly $173. I try as much as possible for my costs to be half of that, or $86. So I would profit $86 and the store would make $227. It’s a hard market. The retailers really want to make sure they’re making a certain margin. And for designers, there’s a lot of other costs involved like tradeshows, models, photoshoots, lookbooks. You don’t get your money back for those things and they can really add up. Renting a studio for a photoshoot can easily cost $1000 for one day.

How have you connected with your retailers? Do you attend tradeshows?

Yes. Last year I did Capsule in New York and Brand Assembly in LA. This year I’m doing Woman in New York. I connected with my international retailers at tradeshows, and others through word of mouth or friend introductions. Tradeshows are very expensive. For clothing, a booth is anywhere from $3000-$6000. Jewelry and accessories are a bit less, but still expensive. I think there’s a lot of designers that shouldn’t do tradeshows because they don’t like talking to people. That’s ok, but you have to put your best foot forward and make sure whoever’s repping your brand is going to be friendly and approachable. I came from retail and like talking to people. I want buyers to know me and put a face to the brand. I want them to know I’m the one that’s accountable to them.

Starting a clothing line takes a considerable amount of upfront capital. How have you been able to find and sustain funding?

It’s more of an ongoing thing for me. When I started, I was working at Phillip Lim in retail four days a week. I still work there, but only once a week. I’m slowly weaning off and working on this more and more. Everything I make I put back into the business. I started with some savings, like $15,000, which isn’t really enough. There’s also competitions and grants. I haven’t won one yet, but I was part of Design Entrepreneurs NYC, which is kind of a “mini MBA” program in conjunction with FIT. They accept 35 designers for a summer program and assign you a mentor, a financial advisor, and a bunch of other stuff. The winner gets $25,000. There are other things for young designers like the CFDA Fashion Incubator and Ecco Domani grant. Sponsorships help. I’m doing a presentation during fashion week that’s in partnership with YouTube. They’re covering the models and the space, so hopefully I won’t have to spend that much!

A presentation during fashion week is exciting. How did that come about? Do you work with a press rep?

Brand Assembly is really supportive of small brands. They run a tradeshow but will also help you with e-commerce, shipping logistics, all sorts of things. They set up the partnership with YouTube and chose six designers to do these presentations. I just started working with a press rep, Christina Tung, but before that all the press I’ve gotten has been organic, including the Racked Young Guns thing. Racked has a good relationship with Of a Kind, so I think that’s how I’ve been on their radar. They also posted an open-call for nominees online, so my friends nominated me. I did a little meet-talk thing with Cynthia Rowley for SyleCaster.com. My good friend is a friend of the editor, Laurel Pinson, so they set that up. I’ve been really lucky.

What do you find challenging as a young designer?

Financials are very daunting. I’m 25 and just came out of school, so what I think is a very expensive price for a studio or a photographer is really not a big deal in the grand scheme of things. I recently started working with an accountant who has a lot of brands like mine. It’s been helpful to have someone look at my financials and be like, “You’re spending a bit too much here” or “You should spend a little more there.” I don’t know yet what’s normal, so it’s good to talk to someone who has experience. Other than that, just keeping faith and believing in it. Like, yes this is really hard right now and it will always be hard, but in a few years it’s very possible that it could be doing really well and making money. It can be challenging to keep that in mind.

Any last advice for a designer wanting to start their own line?

Do a business plan, but keep it open and don’t be too rigid with your plans. Be very accepting of changes that come. Say yes to a lot of things, but don’t be afraid to say no. Don’t feel like you have to say yes to every opportunity if it doesn’t feel like it’s in line with your vision.

Thiel, Peter. Zero to One: Notes on Startups, or How to Build the Future. New York, NY: Crown Business, 2014.